Water puppetry is a traditional Vietnamese art form that dates back several centuries and is performed in a shallow pool of water. The wooden puppets are manually controlled behind a screen by master puppeteers who splash them through the stage with precision and skill. 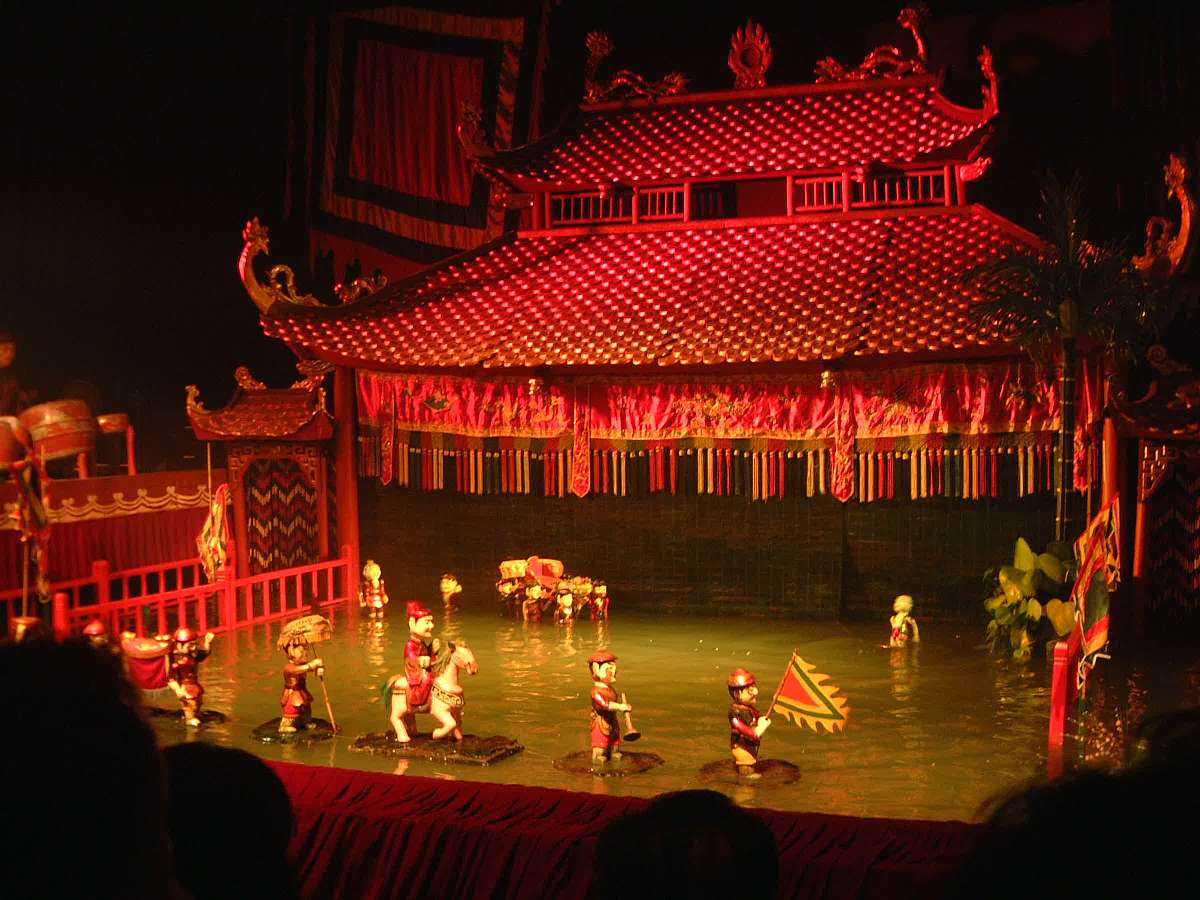 Water puppet has different traits than ordinary puppetry that the puppeteer use water surface (also known as a puppet house or a water house) as a stage which is erected in the middle of ponds or lakes with balanced architecture representing the communal roof in the countryside of Vietnam. There are backdrops at the back, and decorated flag, fan, elephant, parasol, port …

The puppets are made of wood, performed by the control of the people behind the font through the system of poles, wire … and is accompanied by drum and flute.

The water puppeteer stands in the cubicle to manipulate puppets. They manipulate each pole or control puppets by wire system arranged outside or under water. The success of water puppetry mainly counts on the movement of the body and the way it plays the show. 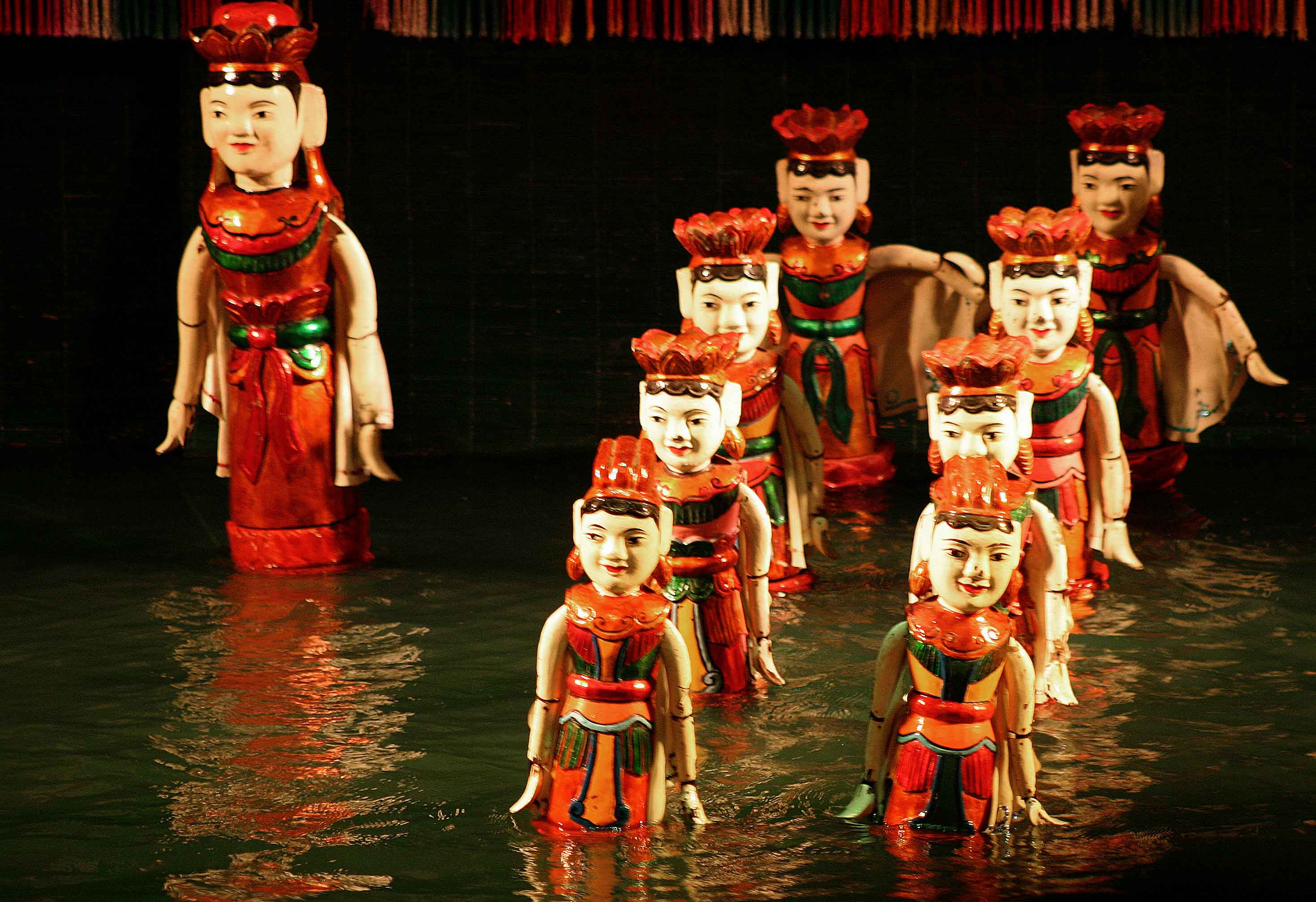 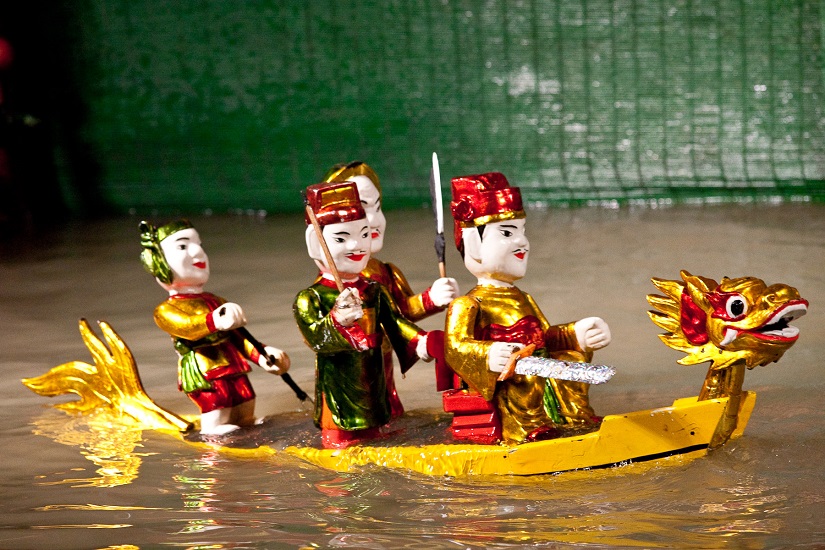 Water puppetry will not attractive without music. Music controls speed, keeping pace, leading the movement, creating the atmosphere full of traditional rhythms. People usually use traditional folk or folk songs of the Northern Delta as a background music for water puppet play.

The water puppet show (puppet show, water play) is considered to be the intangible cultural identity of Vietnamese, a traditional folk art form in the region of The Red River Delta (the wards in the northern delta provinces) that usually takes place on holidays, festivities, happy days, Tet holidays.

Currently, in Vietnam there are about 7 professional puppet art troupes in central Hanoi, Hai Phong, Ho Chi Minh City, Dak Lak, Quang Tri and Hoi An. In addition, there are also dozens of water puppet shows in many localities of the Red River Delta. 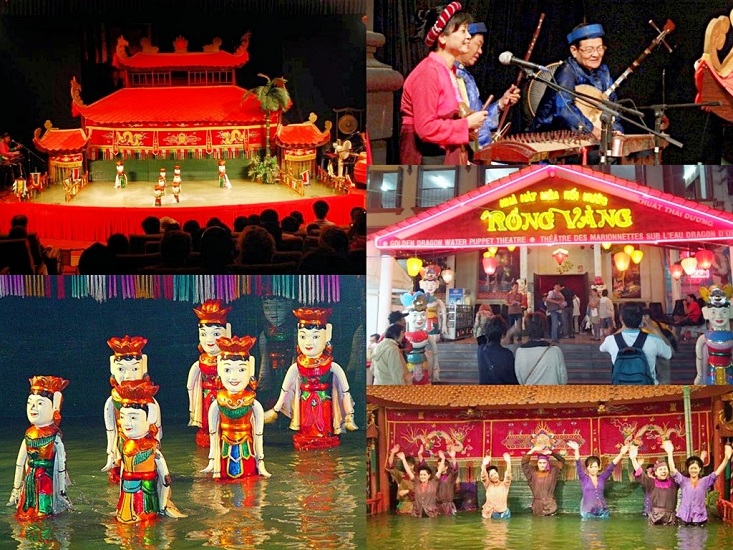 Here are the wonderful places to watching best water puppet show in Vietnam:

Thang Long Water Puppet Theatre is one of the traditional puppet theatres that is still opened until now. Thang Long Water Puppet Theatre was established in 1969 and is one of the most famous water puppet theatres in Vietnam. Since 1990, the theatre regularly organizes international tours and has participated in many art festivals around the world.

Thang Long Water Puppet Theatre is located in the Old Quarter area (57b Dinh Tien Hoang – Hoan Kiem District – Hanoi). The theater is open all day of the week and up to a maximum of 6 performances per day. Some shows also feature English subtitles on screen for international audiences. What is more, Thang Long Puppet Theatre serves performances on request as well.

Located in the area of Thanh Xuan District, the puppet theater on 361 Truong Chinh Street has long become familiar to Hanoiese, even is a hot spot that can not be missed for visitors whenever visiting or working in Vietnam.

The Royal Water Park’s water puppet show has the advantage of being located right in the Bai Chay tourist center, can attract many tourists. Facilities and tourist services here are invested quite synchronously, from performance stage to seat system, sound,… Besides, the orchestra performers are also extremely professional.

The art of Hoi An water puppet show is elaborated through the performance of professional and experienced artists with a careful investment in the content of water, puppets, Light …, will help you really get into the artistic space of Vietnam and Quang culture

The theatre has a fixed performing stage, with its natural, airy space, a comfortable 162-seat stage is an ideal for you to enjoy the art. The location is in the middle of the city, convenient for you to get around.

To see more of the latest tips on tourism, culture in Vietnam at the following address: